My three-and-a-half year old self was recovering from measles on the day of Churchill's funeral and I spent the day on the settee alternately lying under a blanket and playing with the bow and arrow set my grandparents had given me as a 'get well' gift - the furniture bore the circles from direct arrow hits for weeks afterwards. The day was also special because I remember being cared for by grandma and granddad. At some point as the ceremony unfolded on TV, my granddad decided to close the living room curtains as a mark of respect. They did things like that in those days, or, more particularly, my granddad did. He'd spent his formative years 'in service' as a footman, and this had left a rather confusing legacy: he distrusted the toffs, but had an instinctive sense of place. While he got on well with my Labour-voting dad, his son-in-law never forgot that granddad was a member of that confusing breed - a working class Tory. I can't remember now how dad found out about the curtains, it might be that I mentioned it in all innocence when he got home from work, but however he got to know, the response was surprising and has gone down in family legend. Dad was mild-mannered and jovial, but he let us know he wasn't happy about the respect accorded to Churchill by his own drapery. Dad fought in North Africa and Italy during WWI, and while he recognised that Churchill had been a great war-time leader, he also knew he had made mistakes and swapped parties, apparently to gain political advantage. Churchill's ratting and re-ratting, which saw him transfer allegiance from Tory to Liberal and back to Tory was evidence, in dad's opinion, of an untrustworthy side to his character. This was further compounded for dad as - along with many other Eighth Army veterans - he felt that Churchill had reneged on a promise that they would be brought home after the victory in North Africa. Instead, they were sent to Italy - where, in Churchill's words they would have the easy job of destroying 'the soft underbelly of the Axis crocodile'. This turned out to be far from the truth and the First, Fifth and Eighth Armies spent three years, often poorly fed and ill-equipped, fighting against determined German resistance as they advanced the full length of Italy's elongated boot. After D-Day, dad and his comrades in arms also had to endure the put-down that they were 'D-Day Dodgers', who should be fighting in Normandy, instead of 'sunning' themselves in Italy. In typical squaddie fashion, the term of derision was turned into a badge of honour and became an anthem to the largely forgotten suffering they endured in the Italian campaign. We played the song at dad's funeral, and when the TV footage shows the London docks lowering their jibs in homage and the crowds lining the route to mark the 50th anniversary of Churchill's funeral, I think I'll play it again, because the man who led the nation to victory had his flaws and failings too.
Posted by westfieldeditor at 11:03 am No comments: Links to this post

Just seen off the latest in a depressingly long line of cross-cut shredders. The Fellowes H-6C joins the others at the tip, after its power switch packed up and I couldn't find proof of purchase. Only around three-months' use out of this one. The thing with shredders is, given the sheer volume of mail - junk and otherwise - that arrives here with a name and address on it, possession is vital for identity protection, but there apparent built-in obsolescence means I'm forever having to buy another. Shredder makers and retailers are on to a good thing here; what with the tendency to lock up solid - even if you have slavishly followed the maximum sheet instruction, or - as in the latest case - an electrical fault, renders another purchase necessary on a product that is priced towards the higher end of cheap, making it rather unlikely that the receipt can be found. After all, we're talking £35 tops here, not a plasma screen TV or washing machine. Although at the rate at which I'm having to replace them, shredder expenditure will easily come close over time.
Posted by westfieldeditor at 11:44 am No comments: Links to this post

I like our local library, the chief librarian is very efficient and friendly, so our intention to overwork her this year might come as a shock. We don't usually go in for new year resolutions, but this year we've opted for a bit of family-based 'joint enterprise': the first call for all books - and three out of the four of us read a lot - will be Calderdale Libraries. Forget Amazon, first port of call is the online catalogue search and £1 reservation. In July 2014, the ruling Labour group lost a vote of no confidence after making total arses of themselves over parking charges. The Tories took over and scrapped the charges, so now they are casting around for somewhere to make cuts. Library provision had been protected under Labour, but now with philistine Tories in the ascendancy, Calderdale's precious libraries are in a precarious position, which is why there needs to be much greater use of the library service for book and e-book lending, as well as research and computer use in libraries themselves. Go on, ramp up your use of the library - don't care if you inflict stamper's wrist, indexer's thumb or shusher's larynx on the staff - make them work hard and save the service. Same goes for anyone reading this who's unfortunate enough not to live in Calderdale - use your library: volunteers are good, as far as they go, but librarians are a precious resource - work them hard!
Posted by westfieldeditor at 1:33 pm No comments: Links to this post

A quick slap in the dark 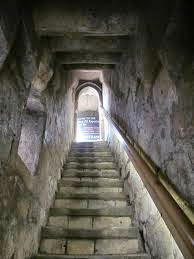 This flight of stone stairs leads from York's city wall to the street below at Monk Bar, one of the ancient entry points to the historic inner city, which houses the famous Shambles and Minster. After a great day in the city, the four of us walked round the walls, leaving at Monk Bar to return to street level just behind the Minster close. About halfway down the stairs, I decided on a whim to perform one of my granddad's favourite set piece jokes. Rather like Eric Morecambe's paper bag routine, this is corny and predictable, yet still funny. It was also an important part of my childhood, as I was invariably let in on the set-up. First, granddad would select a low branch, lamppost or low ceilinged stairway and slap it with the palm of his hand, simultaneously shouting 'ouch'. No matter how many times we'd seen it, there would be a response, ranging from polite titter to full-blown guffaw, with a reproaching 'Alf' from grandma. Walking down the Monk Bar stairs, I was immediately in front of my wife and two sons, my youngest son right behind me, when I reached up and slapped the low stone ceiling. Unfortunately, there was no time to go for a fullblown 'ouch' because the man in front of me turned round and asked if I was alright. 'Yes', I responded: 'did you hit your head' he replied - 'just the side' was the best I could manage. On gaining street level, I turned to see my youngest son trying unsuccessfully to stiffle a laugh, my elder son stumbled into the daylight and immediately followed suit, while my wife managed to combine a wry smile with an admonishing stare. My concerned friend crossed the road before the serious laughter started, so I don't think he saw us completely lose it as a family. As the mirth subsided, however, I like to think I heard faint grandfatherly laughter percolating through from the celestial realm to my mortal ear. It was good to reprise the trick, and I know Alf would have approved...
Posted by westfieldeditor at 10:16 pm No comments: Links to this post

While visiting a friend of a friend's FB timeline, I was dismayed to see that she 'liked' a group that declared England was full. A short scroll down, however, came a mild reproach from an older relative. This reminded her that great grandma came here as a Jewish refugee from Tsarist Russia, and how she met and married great granddad, whom she then nursed for the rest of his days because he was gassed while fighting in WWI.
There are few families, and my own certainly isn't among them, that can trace a presence here going back more than a few centuries. Indeed, the  vast majority of people have at least one grandparent who came here from somewhere else, but a depressingly high proportion of us seem to want to pull up an imagined drawbridge.
I've never been frightened by an immigrant/asylum seeker/ foreigner (insert word of choice), but racists scare the crap out of me. Hold that thought in 2015.

Posted by westfieldeditor at 11:44 am No comments: Links to this post