West Yorkshire places of interest on the Peninne Way

Lumbutts and Mankinholes: two real places that sound like sadomasochistic practices only to be attempted between consenting adults with a recognised safeword.

Posted by westfieldeditor at 1:31 pm No comments: Links to this post

Scarborough's public loos now charge 40p a visit. But don't worry if you haven't got the change, you can go contactless. Payment shows on your card as being made to NYX*Healthamatic. These people really are taking the piss...

Posted by westfieldeditor at 2:01 pm No comments: Links to this post

Typo on 46 million new ASD 50 notes. Someone has to carry the responsibilty for this? https://www.bbc.co.uk/news/world-australia-48210733
Posted by westfieldeditor at 12:53 pm No comments: Links to this post

I've made a couple of new online friends, Phenix and Kelvin. It's unlikely that we'll ever meet face-to-face as they live (or certainly work) in Guangzhou, China. They are employed by the Chinese-based global online crapola outfit, Banggood, which specialises in churning out cheap rubbish that is misleadingly - or even fraudulently - advertised online. The ads are pushed via Facebook and other social media, so you appear to be 'chosen' - targetted might be a better description - to receive them. The catalyst for the interesting range of emails Phenix, Kelvin and I have been exchanging concerns this garment 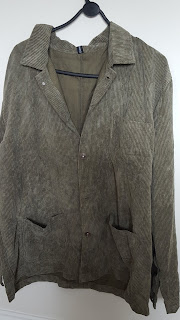 , which Banggood described in the ad they 'selected' for me as a winter corduroy coat. Now, I once owned a very warm and capacious corduroy coat, made from heavy weight cotton corduroy, with warm and generous insultated padding and thought the advert was describing something similar. I've never been to China, but I know winter there brings temperatures far lower than ours in the UK and felt sure the coat would be a real bargain at the advertised price of GBP 28.86. But things were not to be as good as they were promised. When the garment arrived, it turned out to be something more on the lines of a shoddily made shirt. No padding, or even 'real' corduroy as it is 90% polyester. Now, with goods that don't match their description, under UK and EU law, we have a remedy that allows us to claim a refund and for the supplier, usually, to carry the cost of return. But things played out rather differently once I told Phenix and Kelvin about Banggood's porky-pie ridden online advert. For a refund of GBP 9, I would have to pay the return postage! Nice try, I thought, but not really what I wanted to hear - after all, this was as blatant a case of intentional misleading advertising that you could come up with, and one where Banggood were expecting me to either accept the crap, or make an unintentional GBP 19.86 'donation' to their coffers. The bad guts don't get to profit from their wrongdoing - pretty much a cardinal principle of Western consumer law, but one where China has some catching up to do. In the meantime, don't get suckered by Banggood's push ads.
Posted by westfieldeditor at 1:31 pm No comments: Links to this post

For past couple of days we've had a peacock 'visiting' our corner of West Yorkshire. It's a newish housing development, so a large brightly coloured bird does stand out as it struts rather imperiously between gardens and open plan areas. Today is bin day, and by the amount of shrieking and clattering - from bird and bin crew respectively - the former doesn't like the latter very much at all. Perhaps the peacock will move on, or stand its ground against the rubbish devouring monster (presumably part of its anger is due to the loss of a good food source). Whatever the outcome, it's far from quiet in the 'hood right now.
Posted by westfieldeditor at 12:48 pm No comments: Links to this post