The frightened, small-minded people have spoken...

Should've known the news would be bad when I saw that Nicky Morgan had called it for Remain in a BBC report just before I went to bed. But the then touted result of 52 remain, 48 leave turned out to be reversed, and we're on our way out. Cameron is toast, but not until October. I would've thought it would be better if he cleared off now, but a long drawn-out and hopefully humiliating exit could prove to be a fitting punishment for a failed leader. The demographics seem to suggest a lot of older voters went for leave, thereby doing over the futures of their children and grandchildren. Smart move; the coffin-dodgers put two fingers up to those who fight for the jobs that pay the tax which funds their pensions. That's interdependence for you - and that's what Gove et al are fully paid up and in thrall to, because globalisation and privatisation will continue apace. The deluded outers (particularly those who fell for the UKIP line, or the £350 million extra per week for the NHS) are in for a hell of a shock: you're going to see a lot of foreigners, but they won't be coming to work, no - they're coming to buy, buy, buy - your NHS, your workplace/pension provider - all at bargain basement prices, and without any of those troubling EU regulations. Some people are going to learn the very hard way that not all 'red tape' works against them.
Posted by westfieldeditor at 10:07 am No comments: Links to this post

At only £18-£20 per hour the direction is down and out, presumably.
Posted by westfieldeditor at 10:43 am No comments: Links to this post

After a long day in the office when I'm in London, I like nothing more than a beer and a bite to eat before heading to King's Cross for my train home. Last night was no exception - a bottle of Sam Smiths Pale and a plate of stifado (stop smirking at the 'stif' bit - it's Greek beef stew, and very tasty it was too). The problem with dining alone at just after 6.00 is that you get the full-on Billy-no-mates treatment, with waiters tucking you away in a corner at a table for two, but I'm used to it by now and rather like the solitude. Except for my fellow lone diner. He arrived just after me and ordered bolognese - in a Greek restaurant?? Anyhow, he then told two waiters that no cheese should be offered or indeed sprinkled as he was 'lactose intolerant'. No problem, I thought, taking a few draughts of Tadcaster's finest. But he then went on to proclaim his intolerance every time a waiter drew close or asked him if he would like anything else. Offered a coffee by the head waiter, he then went on to describe exactly how ill he would be if perchance he did ingest dairy products. Way too much information, nearly baulked on my stifado (I've told you before, it's a well-known dish, oh grow up...).
Posted by westfieldeditor at 5:44 pm No comments: Links to this post

A glorious day in the Dales 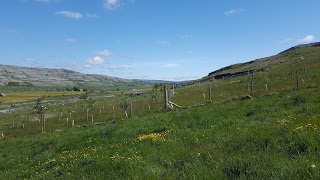 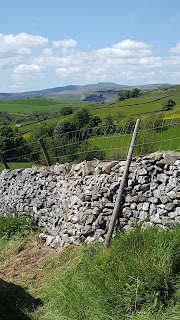 Looking back to Ingleborough on the way to Catrigg Force 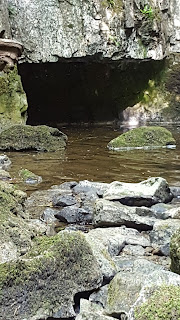 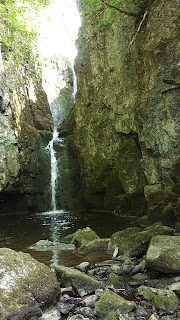 Catrigg Force, the falls and the cave behind them.
Posted by westfieldeditor at 4:03 pm No comments: Links to this post

And or, that is the question

Walking through Wakefield this morning, I came across this sign which made me wonder what they were trying to achieve: a healthier option or double frying to give that genuine myocardial infarction feeling with every meal. If the former, then it has to be Or not +; if the latter, why not go the whole cow and bung in the lard as well? 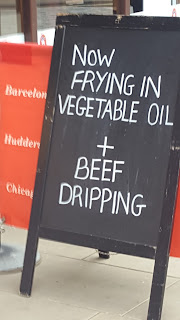 Posted by westfieldeditor at 1:21 pm No comments: Links to this post

Don't mention the war, if you're pining for the fjords...

The Sun has pissed Brighouse off by insinuating, wrongly - as per usual where matters even vaguely 'European' are concerned - that the town's fourth 1940s' weekend was gatecrashed by people turning up in German uniforms.
One of the organisers has asserted that this is wrong. The only two foreign elements turned out to be a bloke in a Polish uniform and someone who claimed to be Norwegian, but who was asked to leave, just to be on the safe side. Dangerous thing, history. Don't mention the war- or the sodding great Christmas tree our erstwhile and ever grateful former Norwegian allies send every year.

Posted by westfieldeditor at 10:07 pm No comments: Links to this post