What a set of bankers

Needing 20 £1 coins for a kids party, I wandered into the Halifax branch of Lloyds TSB. The lunchtime queue was long, due to the lack of cashiers, but I decided to wait. When a cashier eventually became free, I went to the desk and requested the coins in exchange for a £20 note, which I placed on the counter. “Could I have your account number?” asked the cashier, to which I replied that I didn't have an account with the bank; “sorry” she said: “we can only give change to account holders”. “You've got to be kidding” was the best I could come up with as I retrieved my £20 note and headed for the door. Only when I got outside did I think of the ideal repost - “but I am a bloody shareholder 'cos I'm a UK taxpayer”.

I suppose Angela Knight will have a good reason for Lloyd's behaviour, but to the rest of us they still come across as bloody ungrateful bastards...
Posted by westfieldeditor at 9:10 pm No comments:

Although West Yorks police said the arches would be used in Wakefield, I was asked to walk through one at Bradford Interchange at lunchtime on Saturday, 14 November. The arch was being operated by a female PCSO and a man in civvies with an ear-piece. He didn't identify himself as a police officer and I'm kicking myself now because I meekly walked through when asked and didn't question his authority...
Bear in mind, the Interchange was quiet and I had my two young sons with me. I hardly fit the profile of a knife-wielding threat to public order or security. Were they just making up their numbers in an attempt to justify their mobile surveillance operation?

Wish now I'd asked some questions, not just meekly obeyed - rights need vigilance: on this occasion I fell for the authority figure. Sorry.
Posted by westfieldeditor at 4:54 pm No comments:

Yorkshire and its "icons"

The Yorkshire Dales National Park Authority, which is based in Bainbridge, a village in Wensleydale, North Yorkshire is asking people to vote for Yorkshire "cultural icons". For this they helpfully provide a list of eligible persons - you have to choose from both the living and dead. From the deceased, the exhaustive list is Adam Sedgwick, geologist, departed 1873; Alf Wight, deceased 1995, better known as author James Herriot; Arthur Raistrick, a Yorkshire writer and lecturer, who departed this life in 1991; and Marie Hartley, a historian who specialised in recording lost Dales life, who died in 2006.

For an exhaustive list, one omission is glaring - Kit Calvert MBE (1903 - 1984), the farmer, Methodist local preacher, founder of Associated Dairies - as a farmers' co-operative, saviour of Hawes Creamery (that's right; he saved Wensleydale cheese - where would Wallace and Grommit have been without him!) and famed Dalesman - indeed nicknamed the "Complete Dalesman - is missing from the list. The omission is all the more startling because Bainbridge is only four miles from Hawes, where Calvert spent his entire life.

Whoever did the research for the iconic list certainly didn't know the area, or its heroes too well, did they?

The list of the living is equally interesting. You can choose from writer Bill Mitchell, artist David Hockney and broadcaster and writer Mike Harding (a Lancastrian!!), struck from the list, however, is Alan Bennett, writer and national treasure: although originally listed, votes are no longer being taken for this truly illustrious son of the broad acres - why?
Posted by westfieldeditor at 5:30 pm No comments:

So, would demonstrating to save the planet at Vesta on the IoW count against an immigrant applying for British citizenship?

Would like to see Ed Miliband defending his refusal to nationalise Vesta. He seems intent on using December's Copenhagen summit as an excuse for doing nothing. What is it with this government? Why is it OK to nationalise banks and even loss-making rail franchises but not green power generators? Just goes to show, "new" Labour never met a businessman(woman) it didn't like...
Posted by westfieldeditor at 2:54 pm No comments:

Light touch regulation rides again. Alistair Darling believes that regulation wasn't to blame for the credit crunch. Proof, once again, that New Labour will do anything to keep the banks and business on side. Even if it means denying the overwhelming evidence of the last two years.

He should be sending in the regulators to sort out the boardrooms, not sucking up to the architects of this mess.
Posted by westfieldeditor at 2:06 pm No comments:

All you need is love, apparently 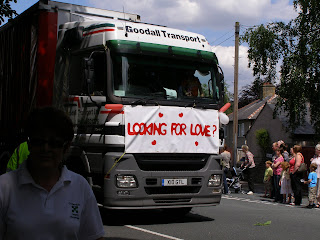 I know what they meant, but West Vale Baptist Church's float could have easily attracted the wrong sort of attention at the Halifax Charity Gala parade
Posted by westfieldeditor at 10:03 pm No comments:

Is there a proofreader in the house? 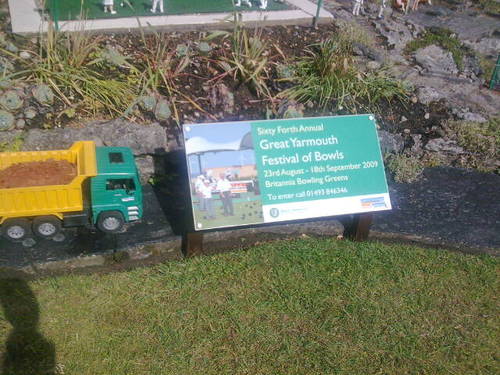 - Posted using Mobypicture.com
Posted by westfieldeditor at 7:17 pm No comments:

Strange thing I've come to feel about history but there's a disconnect between the received version 'given' to us at school and the 'actual' or 'live' version that we stumble across by accident, usually, in my case, while traveling.

Great Yarmouth makes much of its Nelsonian connections: it has a column that predates both the one in London and that which used to grace Dublin's skyline, until, that is, another version of history meant that a British naval hero, even one whose fleet comprised many Irish sailors, was no longer acceptable, with explosive results. Either way, to reinforce its respect for this famous son of Norfolk, Great Yarmouth also boasts an annual Trafalgar Day parade on October 21st.

Remembering Trafalgar is all very well, but just a little way up the coast at Happisburgh, 'real' history intrudes uncomfortably into the well known Nelsonian legend. Just off the coast near Happisburgh in March 16, 1801 HMS Invincible was lost, along with the lives of 119 of its 600 man crew. The ship, which was en passage to join Nelson at Copenhagen, does not feature any further in the great man's history, and those 190 sailors lay in an unmarked mass grave in Happisburgh's churchyard until 1998, when the crew of the present ship to carry the name Invincible along with Happisburgh's PCC, placed a marker stone on the site of the mass grave, thereby honouring their predecessors and adding a fitting tribute – albeit 197 years after the event.

Live history and the received version separated by just 20 miles and 197 years.

When I was at junior school my 2nd year teacher, Miss Tipping, was a very traditionally minded 'old school' educationalist. Never one to spare the ruler, or pretty much anything else that came to hand, she was a stickler for received history. Her charges were well versed in the daring do exploits of Nelson, Clive of India, Florence Nightingale et al. Strange to say, but the loss of the Invincible didn't feature in the great exploits of Britain's imperial past that Miss Tipping liked to relate: her lessons were of victories, not losses; her heroes and heroines had dates and events for us to memorise, there was no mention of the site of mass graves to the victims of that same imperial past where the heroes didn't happen win or the 'good' didn't come through with shining colours.
Posted by westfieldeditor at 7:25 pm No comments:

- Posted using Mobypicture.com
Posted by westfieldeditor at 3:05 pm No comments: 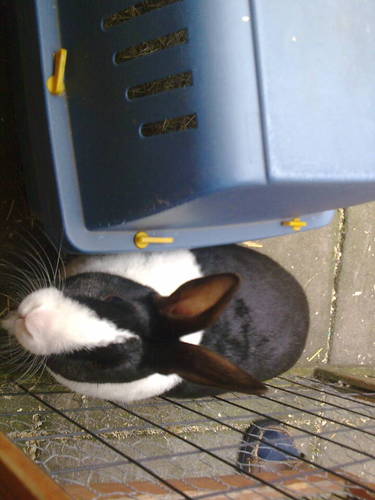 - Posted using Mobypicture.com
Posted by westfieldeditor at 11:44 am No comments: 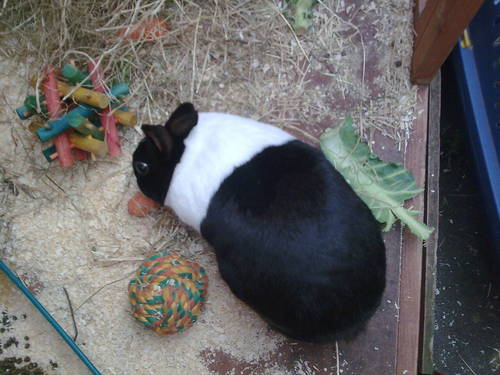 - Posted using Mobypicture.com
Posted by westfieldeditor at 11:42 am No comments: 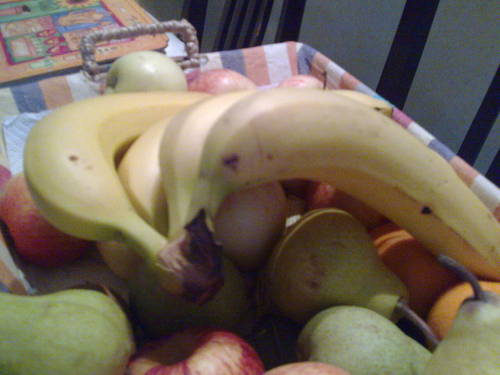 - Posted using Mobypicture.com
Posted by westfieldeditor at 8:31 pm No comments:

Calderdale Council, which includes Halifax in West Yorkshire, have decided it's time to bulldoze the Central Library building (which also houses the Council Archive) and split the facilities around two out of town sites, one of which is yet to be built and is at present a pile of rubble, waiting to be turned into a thrilling mix of retail and office accommodation (in this recession????).

Please sign the petition so we can, hopefully, restore some sanity.
Posted by westfieldeditor at 11:45 am No comments:

Work ever longer hours - even though the dole queues lengthen

So we're keeping the 48 hour week opt-out. Good news for UKIP but pretty crap for anyone looking for work. Absolute madness.
Posted by westfieldeditor at 10:26 am No comments:

And let's all live in cloud cuckoo land

Interesting to see the Department of Children, Schools and Families (DCSF- or Dept for Cushions and Soft Furnishings) to the Children's Society survey into young people's experience and understanding of the recession - according to their spokesperson, we it's "disappointing" that children should be worried, going on to say, rather obviously that

"Parents are clearly best placed to talk to their children about their worries, but schools also play an important role in teaching young people the skills they need to become healthy, happy and confident individuals."

How can they be "confident" if we keep them in the dark: confidence comes from having the ability and the knowledge to make informed decisions and have an awareness of the world around them; not by being cosseted and deluded - that way we create a generation of happy morons.
Posted by westfieldeditor at 9:37 am No comments:

But surely it was the self-same "quality people" that got us into this mess by following the orders of their leaders - the former "masters of the universe" who didn't understand what they were driving their underlings to sell and acquire on markets bloated by securitised debt.

As for the argument that runs: "we have to pay them because it's in their contract" - has Parliament forgotten that it's supreme: contract law is common law, statute law changes it at a stroke and can be retrospective. Have a look at the Law Reform (Frustrated Contracts) Act 1943 to see how far Parliament has intervened in the past. Those two were desperate times - we were at war then, and the Act prevented claims being lost for goods that were supplied to countries subsequently conquered by the Nazis.
Posted by westfieldeditor at 10:19 am No comments:

As expected, Miliband bottled it at the dispatch box. Let's hope the comments by Lord Justice Thomas and Mr Justice Lloyd Jones in the Binyamin Mohamed case don't get swept away in a tide of Foreign Office mush. And why does the US allow openness at home but prevent it here - Clive Stafford-Smith, once again, has a very pertinent take on the nature of the relationship - and the supine behaviour of our politicos, to whom it seems to matter more than that most cherished of democratic freedoms: parliamentary supremacy.
Posted by westfieldeditor at 4:11 pm No comments:

A fight they can't win?

"British jobs for British workers" - a laudable refrain, but one that looks like a fight that can't be won.The anger of those picketing the Lindsey Refinery - and their supporters at sites elsewhere in the UK - are a symptom of the fear and unease felt by many workers, but EU law won't allow the government to ban foreign workers coming here to work.

Strange also that Gordon Brown, having given the hostage to fortune phrase in the first place back in September 2007, today tried to straddle two horses heading for a painful divergence: speaking from Davos, he empathised with the protesters BUT pleaded for a rejection of protectionism - as the late, great Eric Morecambe would've said "get out of that".

This is just the first protest we'll see in the course of the recession: just hope that the others have a better chance of success.
Posted by westfieldeditor at 8:46 pm No comments: