Wrong time and place for an argument

The combined efforts of the Roman Catholic and Anglican hierarchies in trying to force an opt out for Catholic adoption agencies in the Equality Bill risks further isolating the Church.

Gay adoption is always an emotive issue that plays well in the fevered imagination of conservative op-ed writers - yet the question is, how many gay couples would decide to go to a Catholic agency in the first place.

Wouldn't the Archbishops of Westminster, Canterbury and York have done better keeping their powder dry for any issue that really does affect people - such as globalisation, debt, gambling or the Iraq war debacle?
Posted by westfieldeditor at 4:12 pm No comments:

Fear, loathing and the Daily Mail

So now we know why Paul Dacre doesn't get out much on his own. His Hugh Cudlipp lecture at London's College of Communications told us that the BBC is an Orwellian institution full of "cultural Marxists" and that the Tory Party is no longer Conservative.

Good to see he's still allowed to hold down a job at the Mail...
Posted by westfieldeditor at 4:06 pm No comments:

The assassination of an Armenian journalist in Istanbul is probably low down on most people's list of things to worry about, but the killing of Hrant Dink comes at a very difficult time for Turkey and it's aspirations to join the European Union.

Dink was outspoken about the Armenian genocide of 1915 and the legally enforced silence on reporting it that still pervades Turkish society. Indeed, Dink himself had been prosecuted under the notorious Art.301 of the Turkish Legal Code, which makes it an offence to insult Turkishness, for his articles on the subject.

It's good to see Turkish politicians lining up to condemn the killing, but the question should surely be, wouldn't it be better to ensure free speech and open discussion of this most contentious of subjects ahead of any further talks on Turkey's EU accession?
Posted by westfieldeditor at 3:52 pm No comments:

Save us from the recruitment consultants

A report out from a consultancy outfit called Hudson UK reckons 77% of "senior executives" (undefined, naturally) want to get rid of a set quota of employees every year - and the only reason they don't is that they're wary of creating a climate of fear (in much the same way that the Roman Army was wary of overusing decimatio, presumably).

Apart from generating froth and press column inches, Hudson, whose website espouses such gems as "Our innovative solutions address both hiring strategies and organisational effectiveness – people and performance", don't seem to have considered the effect such ridiculuous statements would have on productivity (having got rid, you still need some people to actually do the work guys!) and the astronomical increase in recruitment costs this policy would create. But that's just the point, isn't it? Half baked idea, spurious statistics equal more business for the useless consultants!

Sack the workers - no: just get rid of the consultants.
Posted by westfieldeditor at 4:56 pm No comments:

Rupert Murdoch's decision to call off the papparazzi is not the ray of light it first appears.

The threat of legal action hasn't worked before - indeed it's just made media barons squeal louder about press freedom and the public "right to know". But things are different now. Why? Well, it's all down to another royal, Princess Caroline von Hannover, and her long-running battle with German snappers. Caroline, daughter of Prince Rainier III of Monaco, was long regarded as prime media property, but she finally had enough of being dogged by the papparazzi whenever she left home. The ECHR agreed that her right to privacy (under Art.8 of the Human Rights Convention) took precedence over the media's right to freedom of expression under Art.10.

Which all means that if Rupe hadn't called off the snappers, the Palace would probably have succeeded in getting an injunction against News International.

One final thought: why did we have to endure journos of the "royal correspondent" variety chasing papps pursuing Miss M down the street to bring us a story on media intrusion? Old Rupe must be laughing all the way to the bank...
Posted by westfieldeditor at 9:21 am No comments:

Blue Skies and the Third Way into the sunset.

So, it looks like Tony Blair is heading for the charitable foundation lecture circuit haven so beloved of former US presidents. Well, having spent his time in office cultivating a presidential style at home, I suppose it's only logical that he wants to be like George and Bill when he leaves No.10. Last of the Summer Whine?
Posted by westfieldeditor at 12:51 pm No comments: 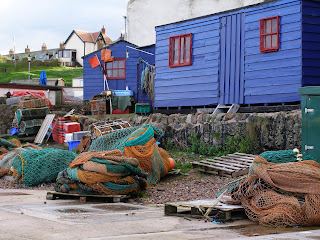 Because it's January and because it cheers me up, and because I don't really need a reason to publish so I'm going to anyway...
Posted by westfieldeditor at 5:56 pm No comments: