On a gold autumn day - Calderdale, not Orangefield (apologies to Van the Man)

Cycled from Brighouse to Sowerby Bridge and back on the Calder Hebble Navigation towpath (that's a canal, for the uninitiated). Anyway, here's some Autumn gold, hope you enjoy as much as I did taking the photographs. 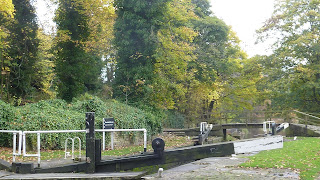 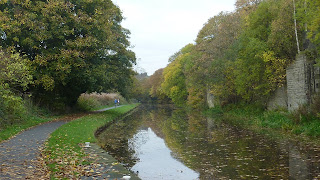 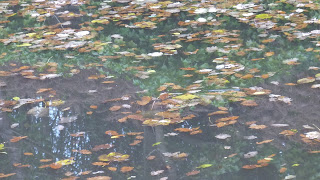 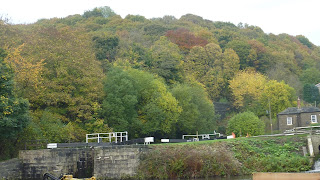 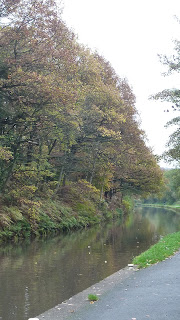 Posted by westfieldeditor at 5:24 pm No comments:

Keeping to the script

Had to buy a new router yesterday, owing to its predecessor packing up without warning. The replacement, a Netgear     AC1600, ticked all the techie boxes, including streaming and gaming. But it resolutely refused to accept my ISP's login settings, so I called Netgear technical support.
After several minutes listening to loud muzak, a female operative answered the phone and proceeded to take my details. After a short while, I was asked if I would like to join Netgear's mailing list (hint to Netgear marketing: technical support calls might not be the most fruitful source of future sales, if the caller can't get their present purchase to work).
I was then taken through an obviously scripted sequence. When this didn't resolve the issue, we went through it twice more. An hour and a half later, the operator admitted defeat and we ended the call with her telling me to contact my ISP and ask them to 'reset the Internet connection and refresh my username and password'. The ISP's tech support dept took some getting through to ('unexpectedly high call volumes'). But eventually a guy traced the problem and the router connected. At this point, I asked about resetting the Internet, only to be told that this was impossible (the request actually reminded me of the IT Crowd episode where Jen 'breaks' the entire Internet by dropping the box that Chris and Moss have told her contains the world wide web as a joke).
The router works, but Netgear tech support didn't help bring this about, and the scripted approach prevented the problem being identified sooner.

Posted by westfieldeditor at 9:09 pm No comments:

Spent the weekend in a 'contemporary hotel' but didn't give much thought to what it meant until I took a shower and then ordered breakfast.
The reception area, corridors and rooms were all clean lines, bold feature walls with contrasting lighter tones. But ''contemporary" has its limits, as I discovered in the shower. This was an old fashioned mixer affair, with the intending showeree trying to gauge flow and temperature from the bath, before turning a third tap to switch the water from bath to showerhead. All of this effort could soon be undone, however, as anyone drawing water elsewhere could either send a stream of scalding water cascading from the shower, or turn the temperature to a level that would be more appreciated by polar bears or penguins.
As I experienced the latter twice during the shower, I went down to breakfast craving hot coffee. But, here again 'contemporary' had its limits. The cups were small and guest seemingly not to be trusted with a cafetiere. Leading to a situation where every sip was followed by a scan of the restaurant, in the hope of securing a refill from a passing and suitably equipped waiter.

Posted by westfieldeditor at 7:01 pm No comments:

The Dentist will see you now

Just back from having a filling. The dentist had to get the dental nurse to place a finger on my chin - seems I was showing signs of wanting to 'chew the drill', not, as she helpfully pointed out 'a very good idea'. It must be novocaine that unleashes a reckless streak in and around my jaws. Her predecessor told me off for trying to bite her just after the jab took effect.
Posted by westfieldeditor at 4:30 pm No comments:

Gone for a soldier?

Being in need of some teaching work after the late cancellation of a course, I registered with a number of agencies and, by way of a circuitous cyberspace route, ended up in the clutches of Totaljobs, website dedicated, according to its blurb, to finding us all our 'perfect' job. In my case, this should have been within the, admittedly, fairly narrow confines of Post-16/FE Law teaching or editorial work. However, Totaljobs have other plans for me, because they've taken to sending me several links per day to the Army. And not just any military role, but rather specialised stuff, such as 'mapping', mail courier (thought they'd all be on email now), or a rather more mundane 'warehouse operative' role. Have to wonder, how many of those who follow the link all the way to the recruiting office end up in something altogether more mainstream military, such as infantry? Still, I'll bear it in mind - as long, that is, as the Army are indeed open to discussing career options with a 50-something with blood pressure and a bad back who can't manage Tuesdays due to a prior work commitment...
Posted by westfieldeditor at 1:57 pm No comments:

An Agent of Casualisation

Casualisation was probably an unintended consequence of the reforms to the Further Education system, or so I like to think. After all, who in their right mind - except perhaps a right-wing idealogue, would want to take an experienced, well-educated, settled workforce and turn it into a fear-obsessed group - always looking over its shoulder for changes to contracts and working practices, fearful of course cuts or amalgamations, wondering if or how they'll have enough hours' teaching next term, next September? I've been forced to look for teaching work after the start of the new academic year - a situation that probably wouldn't have come about even a few years ago, but now - due to cost-cutting - is more common. And this means having to use employment agencies. For a while now, I've become increasingly concerned as to their understanding of the roles they are trying to fill. I teach Law, once a A level popular subject, but now - thanks to the Governments ill-considered A level reforms, one that colleges and sixth forms are becoming increasingly wary of. After all, the only predictor of final outcome, after 2 years' study, is now the student's GCSE grades. A lot can happen between the ages of 16 and 18, and Law is not a widely taken GCSE subject. With little to go on in terms of final grade prediction or target setting, school and college managements seem loath to offer Law, when other courses that have a GCSE equivalent can be taught instead (such as Sociology or Psychology). Enter then the agencies, paid by results, they offer harassed heads of departments the chance - for a fee/commission - to offer courses that have either last minute interest, or been affected by teacher non-availability. So it was that I saw an advert for an A level Law teacher, no hours mentioned, or even duration of contract. My initial application was enthusiastically received and I called the agency yesterday morning with high hopes. But that's when it all went wrong. The named contact explained that he hadn't written the advert himself, and that the school sixth form wanted someone who could teach Law AND Sociology. I was a bit annoyed at this rather important omission and the conversation ended with a half-hearted offer on his part to call the school and see if they would take an experienced Law teacher on an 80% contract that's supposed to run until July 2016. Now the waiting game begins again, although I doubt anything will come of it. Demoralization sets in quickly when agencies get in on the act: they only want result and don't seem that motivated to negotiate on behalf of those that don't fill their criteria - even where they have singularly failed to stated exactly what those criteria are at the outset. After all, a casualised workforce has little or no rights and can't - or wont' - fight back. You have to kiss the (agency) hand you dare not bite these days.
Posted by westfieldeditor at 11:51 am No comments:

I'm not that bothered whether Jeremy Corbyn kneels, bows or curtsys when he eventually joins the Privy Council (after all, both Cameron and Clegg took their time about getting round to the formalities). The important thing - and a point missed by the media feeding frenzy - is that he does join if only to inject some accountability into its secret and hide-bound operations. You see, the Privy Council, which apparently always has to stand when it meets the Queen (great to live in such a grown-up democracy, isn't it?), has a law-making role. It has power conferred on it by Parliament in a number of acts that allow it to make Orders in Council, usually when Parliament is on one of its many holidays. These Orders, which all the Privy Council articles I've seen over the past few days failed to mention, can have far-reaching consequences (one Act that gives the Council power to make law is the Civil Contingencies Act 2004, which - in theory - could allow it to give drastic powers to the police or armed forces in the case of civil unrest or emergency). And for drastic consequences, look no further than the Order in Council that deprived the Chagossian Islanders of the right to live on their traditional island home of Diego Garcia, so that the UK could hand it to the US for a military base. The sooner Jeremy joins the Privy Council the better.
Posted by westfieldeditor at 3:55 pm No comments:

Some recent utterances by the Prime Minister are rather worrying. First, he stated - this time in the context of an ECJ judgment - that he would refuse to follow a court judgment that outlawed the blanket ban on prisoners voting. Although Cameron has form in this - he's already refused to accept an ECtHR decision on the same subject. Second, we have his shiny-faced rant to the Tory faithful against the danger posed by Jeremy Corbyn. In a highly selective quote, with intentional twist in meaning, he repeated the lie that Corbyn said Bin-Laden's death was a 'tragedy', when in reality (always an unwelcome guest at Tory conferences), Corbyn actually felt that the tragedy was that Bin-Laden was not tried for his crimes. So, we have a Prime Minister that sets the dangerous precedent for those who want to ignore court judgments they don't like and who feels that 'extra-judicial' killing is preferable to the long-winded and excessively expensive, but time-honoured (and Magna Carta ordained) right to a free and fair trial (also found in the European Convention on Human Rights 1950 Art.6, Mr C - if you're interested). But then again, judging from the baying horde in the conference hall, probably not.
Posted by westfieldeditor at 3:27 pm No comments:

Oik or Oinky, it's grim up North, Dave

I look forward to Conservative Party conferences - being in government (in office, at least) they get to go last. Labour had a spectacularly good week down on the South Coast. But now Dave's Tory gang face a rather different prospect in Manchester - centre-piece of their much-vaunted Northern Powerhouse, lest we forget. Not only has their venture north led to a large part of the city centre being placed under something resembling a US-style 'lock-down', but delegates have reportedly been told to hide their conference passes while traversing the mean streets on their way to and from the Party jamboree. All this just four short months since Dave's less-than-overwhelming 12 seat majority general election 'victory'. If they're scared of the proles now, what are they going to be like in a few years' time?
Posted by westfieldeditor at 10:28 am No comments: