Senior moment at the Chippy

How many carrier bags does it take to hold fish and chips three times, a sausage, three lots of curry sauce and a portion of mushy peas? I plainly thought just the one, because as it was handed over, I turned on my heel and left Blakeley's fish and chip emporium in Ship St, Brighouse.
On my arrival back at home, however, it was pointed out to me - somewhat harshly I feel - that my solitary carrier only contained three portions of chips and one fish. A hasty phone call to the shop revealed two further bags were still there. At this point the owner offered to bring them round for us, and I was able to thank him in person, albeit rather embarrassed for my momentary lapse into a senior/craft moment.

Posted by westfieldeditor at 10:08 pm No comments: Links to this post

Junk mail from Murdoch's minions urging me to 'discover' my 'perfect Sky TV Bundle'. I very much doubt it. In my case, it would be an endless loop of Rupe being bundled into a van (shades of the Night Manager finale), intercut with Kelvin being doorstepped by Channel 4.
Posted by westfieldeditor at 11:19 am No comments: Links to this post

Not yet 10 and I've already had Twitter exchange with Ian McMillan on the dangers of food debris from onboard train catering.
Fear the rest of the week's going to be something of an anti-climax...

Posted by westfieldeditor at 9:59 am No comments: Links to this post

Good walk today with Leeds Ramblers from Hampsthwaite to Birstwith in Nidderdale. A 5.5 mile circular walk in great company with fields full of lambs and dozens of wild rabbits on the homeward leg beside the River Nidd. They seem to like their Cricket in Birstwith, judging from the two matches taking place simultaneously in adjacent fields, the match in the field closest to the village centre had a bit of an after-thought feel to it, being played, as it was, on a strip of recently mowed grass to the right of a marked out rugby pitch,the fielders keeping an eye out for the H posts as they went about their task. On our return to the start on Hampsthwaite's village green, the group rounded off an enjoyable afternoon with tea/coffee and cake at Sophie's Coffee Shop and Delicatessen cum Bed and Breakfast further along Hampsthwaite's main street.

. The scones were of an enviable height, and so substantial in heft and mass that a few dozen would provide an effective road block, should the revolution ever come to Nidderdale. The only discordant note of the afternoon was provided by the waiter when he queried my pronunciation of scone (forget the 'e', it rhymes with Ron - as enunciated beautifully by Michael Palin in his brilliant rendition of the Lumberjack Song,listen and learn my be-pinnyed friend, listen and learn...
Posted by westfieldeditor at 8:47 pm No comments: Links to this post

Rhubarb lurking amongst the apples - if you can't trust pies, what hope is there?

Arrived back from Tesco to find that my impulse buy - an apple pie for a quid is actually rhubarb. And I hate rhubarb... As a child, my rhubarb-loving parents often tried to pass rhubarb off as plum. I soon learned that plums aren't cube-shaped and don't change the inside of a pan when you 'stew' them. Rhubarb is cubed and 'stewed' - left to simmer in boiled water with a large amount of sugar, in an attempt to make the vegetable (oh, yes it is) vaguely edible. Not even the 'clearing out' properties of rhubarb (as my Dad was keen to proclaim - roughage was important in our house) made it a substance even remotely suitable for human consumption If this damnable imposter of a pie is going to be rendered even remotely edible it's going to need custard in a quantity sufficient to float a battleship.
Posted by westfieldeditor at 2:01 pm No comments: Links to this post

The Pirate of Olympia

Last Tuesday, I attended the first day of the London Book Fair, keen to explore the myriad intricacies of e-book production and online archiving, with, perhaps, a sidelong glance or two at marketing and more traditional forms of book selling. Imagine my surprise, then, on entering an exhibition hall to be met by a man in pirate costume, waving a toy sword and generally making free with such stock phrases as 'shiver my timbers' 'pieces of eight' and asking if I wanted my photograph taken with him! Short of slamming my bodily extremities in a chest of drawer or signing the national anthem in public, I couldn't think of anything I'd like or need to do less, although I didn't couch my refusal in such absolute terms. I did, however, check the identity of the stall he was associated with, and was surprised to see that it was one that only seemed to sell books by one particular author: L Ron Hubbard. Now, Scientology's choice of a pirate theme seems rather strange - given their recent run-ins with others who adopt that style and title. Then again, the decision to book a stall at the LBF by the Scientologists also struck me as rather unusual, given the general air of liberal enquiry and hard nosed, hard sell commercialism that seemed to pervade the rest of the attenders and exhibitors.
Posted by westfieldeditor at 1:52 pm No comments: Links to this post

My Norman no-mates table-for-one dinner in a Bloomsbury curry house was unwittingly enlivened by the table chat of an early evening work outing. Six Londoners, all male, held forth on their favourite strip and lap dancing joints. Enlivened by a few Cobras, a couple of them then went on to describe the services they'd enjoyed from their favourite sex workers before the k member of the group broke into the hackneyed refrain about satellite TV owning benefit claimants. The conversation then took an unexpected turn as they then did a High Fidelity-esque list compilation of their favourite violent and supernatural films.
All in all, I prefer the Python parody. The London boys were a loud, grotesque throwback to Viz's Cockney Wanker character.

Posted by westfieldeditor at 11:38 pm No comments: Links to this post

Sights and sounds of London

Just did an impromptu King's Cross tour guide routine for 2 Californians on a viewing platform overlooking the plaza and Regents Canal. One thanked me for using miles as a distance measurement. Had to explain that we always use them. Feel a bit ashamed for pointing out the spot where Churchill fell in as he was chased by King George for farting at teatime but you can't be nice to them all the time, can you?

Posted by westfieldeditor at 9:17 pm No comments: Links to this post

Came home from pleasant week in Cornwall to a re-hanging blind situation. I'd set off knowing the fitting connecting blind to ceiling had come off, causing the blind to fall and hit spouse on the way down but gave the issue little thought until I ventured into the back bedroom soon after we arrived home, to find the blind laying on the bed. So today, out came the drill and rawlplugs. To get a good 'fixing' I tried to drill up into the top of the window reveal, only to find that, even using a masonry drill bit with the drill on 'hammer' setting, I was getting nowhere. Then I spotted a second hole at a right angle to the first, that allowed for a wall fixing alternative.
Things went swimmingly for a while. New hole drilled, fitting screwed to the wall. All that remained was to re-hang the blind. And that's when disaster struck. Attempting to lever the blind into position between the two retaining clips, I managed to snap the flimsy plastic connector on the left hand side (see photo), sending the blind back down onto the bed, to the accompaniment of several choice Anglo Saxon epithets from my self as balanced on the bed in the recently acquired knowledge that the re-fitting is going to cost more time and money.
I need a holiday. 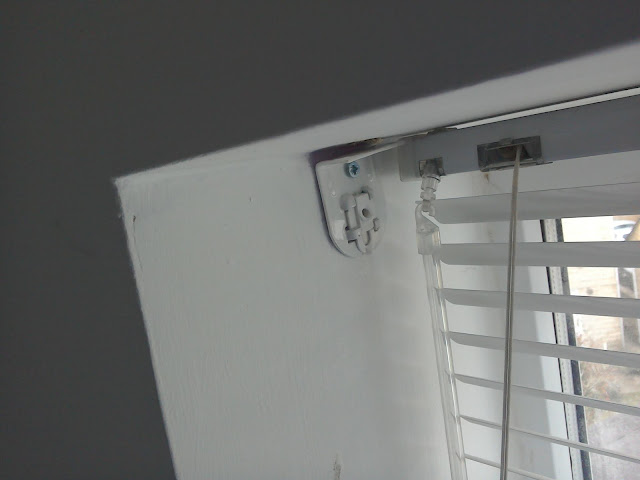 Posted by westfieldeditor at 5:03 pm No comments: Links to this post

Spent a pleasant couple of hours cycling around Portreath on north Cornwall coast. This is, or rather was, mining country and the area is littered with former mine workings and engine houses pepper the landscape. Many of the mines were linked by a tramway that took the ore from the inhospitable - and frequently storm-tossed north coast - to the more sheltered and deep waters of the Carrick Roads at Devoran, between Falmouth and Truro. Bike rental from Elm Farm at Nancekuke came to £30 for three adults. The Farm also has a cafe, licensed bar and a camp site. Good times in Cornwall.

Posted by westfieldeditor at 6:23 pm No comments: Links to this post

Had a interview for work at a university with a big white tower in Leeds last Thursday. Four member panel questioned me for an hour for a job I was more then amply qualified for. Got the rejection this morning. Apparently I can 'phone next week for feedback. Hope no-one waits in for the call.

Posted by westfieldeditor at 11:09 am No comments: Links to this post