Dave wants you to be happy!

We've been here before, Jeremy Bentham came up with his "felicific calculus" over 300 years ago. Only problem is, how can you make the majority of people feel "happy"?

What it "happiness" - social interaction? educational success? Thriving arts scene? Universal health? All things, in short, that now seem to be under threat from the government's austerity measures.

You can, of course, make people feel "happier" by making them focus on their basic needs: warmth, shelter, reading Mr Murdoch's newspapers, signing Bobby McFerrin's greatest (and thankfully only) hit. In short, you create a nation of happy morons, whose pleasure is assured by anything the ruling class seem fit to throw their way - as long as its dressed up on language that will make them feel good for the short-term.

Put it another way: how can you feel "happy" when you learn more about Andrew Lansley's plans for backdoor NHS privatisation or IDS's ideas for a benefits system that stigmatises the poorest and most disadvantaged in our society.
Posted by westfieldeditor at 9:26 am No comments: Links to this post

Degrees are good for society, it's not just self-interest

Heard Janet Daley on Radio 4 this morning, waxing lyrical (and rather misty-eyed, no doubt) about the wonders of the US higher education system, and how she worked 6 nights a week in a cinema to fund her studies. Then she came to the good old Tory question: "Why should those who don't go on to uni pay for those that do?"

Well, this takes us back to Thatcher and "no such thing as society", doesn't it. If you've been to the doctors lately or had a tooth filled, you'd be rather glad that the person you saw went to uni: in effect, you benefited from the knowledge and skills they got from higher education. Similarly, if you've dealt with someone who has a degree - and used the knowledge and abilities they gained from it, whether they were in a "graduate" job or not - then you've also benefited, albeit indirectly, from higher education.

As for Ms Daley's US experience, that struck me as the transatlantic equivalent of Monty Python's 4 Yorkshiremen. We don't have to follow the US in everything, and higher education is one area where we have more than enough experience on this side of the water to formulate our own policies.
Posted by westfieldeditor at 10:58 am No comments: Links to this post

Coincidentally, given yesterday's announcement that the Coalition Government is to close NHS Direct, I had to call on its services yesterday morning when my son complained of stomach cramp.

Although the initial call was taken by a call-handler (what they?), I was soon called back by a paediatric nurse who reviewed his symptoms and then made an appointment for us to be seen at an emergency clinic at 9.00am.

Following NHS Direct's replacement by the cheaper 1-1-1 helpline, call-handlers, with around 60 hours training, will take the majority of the calls. As I found yesterday, when calling about a sick child, there's no alternative to fast, effective diagnosis and referral - remember this is a holiday weekend in the UK, and my own GPs' surgery is closed until Tuesday morning: what would 1-1-1 provide in this instance?

Andrew Lansley's announcement of NHS Direct's demise - during Parliament's Summer recess, makes Cameron's promise on NHS funding seem like cheap political opportunism, intended to dupe the gullible into voting for the Tories "the new party of the NHS".

Remember the 80s - the NHS most certainly isn't safe in their grubby little hands.
Posted by westfieldeditor at 12:53 pm No comments: Links to this post

Sunday, May 30 at 5.45 I roused my eleven-year old son and keen Sea Scout for an important rendezvous. His unit, 12th Halifax, had been invited to put on a kayaking and canoing display for the Chief Scout, Bear Grylls (actually, he’s called Michael) at Reva Reservoir, near Bingley, West Yorkshire.

As the scouts had to be on the water by 8.00, and we also had to pick another scout up en route – also my son is not a morning person, I prepared him the night before by telling him how his grandfather had paraded in front of Robert Baden-Powell at Pontefract Racecourse when he was 12 in 1933. Granddad died last year and he was very close to my sons, so I thought this would head-off any early morning protests.

In the event, he got up without a protest, dressed quickly and we left the house with sailing gear, vacuum flasks and jam sandwiches by 6.10. Collecting his friend on the way, I dropped them at Reva at 7.15. Parents couldn’t stay on site and a rather officious scout leader told me to return at 9.30. Strange, as the reason for Bear’s visit was to drum up adult volunteers. That aside, I went to Bingley where I attended the 8.00 Communion service and wandered empty streets before setting off back to Reva.

Bear, who was on a tour of Northern England, arrived by helicopter and spoke to scouts and leaders, including my son who was kayaking. Bear reached down to shake his hand, whereupon my son told him: “my granddad marched in front of Lord Baden-Powell at Pontefract Racecourse”. “That’s great” Bear replied.

It certainly was – my son isn’t lost for words and speaks easily with adults; I know dad would’ve been so proud of him. After all, he would’ve just been a face in the crowd on that parade, but his grandson spoke to the Chief Scout in person.

Scouting was vitally important for my dad and scouts of his generation. He grew up during the Great Depression. Money was tight in many families and scouting allowed them to get out of the city and explore the countryside. If Bear's tour drums up more volunteers, at a time when we're seeing public sector funding cuts, then the early morning will have been worth it.
Posted by westfieldeditor at 12:07 pm No comments: Links to this post

Overheard in Brighouse fish and chip shop queue:
“We had a power cut for a couple of hours the other night.”
“Really, what did you do?”
“Nothing. We just sat around like lemmings.”

Someone forced to undergo a period of enforced idleness usually likens their situation to a piece of citrus fruit, not a suicidally-inclined rodent.

Couldn't help wondering what they'd put in a meringue pie or squeeze over their pancakes.
Posted by westfieldeditor at 9:21 pm No comments: Links to this post

Pay rates can go down...

I was offered some teaching work at a further education college yesterday. This was a "repeat" booking as I was going to be teaching a course I first delivered 2 years ago. However, Personnel decided to cap the hourly rate at £5.90 per hour LESS than I earned in 2008. Guess my response.
Posted by westfieldeditor at 4:25 pm No comments: Links to this post

An Aire of Nostalgia

A walk by the river Aire in Leeds.
Spent part of the day on a Ramblers' walk led by my former science teacher along the river Aire from Leeds City centre to Woodlesford.

The route was strewn with memories for me. Starting with the Calls 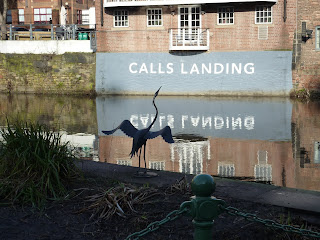 , where I learned to row and sail with the Sea Cadets, we walked past Crown Point Bridge 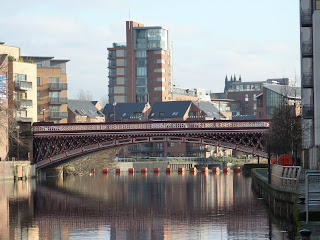 and the Royal Armouries. Sad to see the former location of the Sea Cadet unit at Leeds Lock Island now abandoned, with weeds poking through the parade ground and the buildings falling into dereliction.

The walk took us on out of the city's waterfront area, under South Accommmodation Road, running parallel to Hunslet Road to Thwaite Mills - and the site of the present location of the Sea Cadets

(I carry a permanent reminder of the Bofors gun in the form of a lump above my left ear, where the barrel caught me a blow that needed stitching one summer Sunday afternoon in July 1976).

Lunch at Thwaite Mills allowed me to catch up with John Clark, walk leader and former Science Lecturer at the then Kitson College of Technology. John succeeded in teaching me the rudiments of physics as part of my City and Guilds course in Lithographic Printing in the early 80s. He told me he'd retired in 1992 after 24 years at the College. His quiet manner and assured delivery were still in evidence during the walk as he described the route and places of interest, such as Atkinson's Mill in Hunslet.
Afterwards, I remembered an occasion when John, a strict Methodist and teetotaler, deviated from his planned lesson (how Ofsted would've had disapproved!) to give his class of printing apprentices, who were anything but teetotal, an impromptu lecture on the action of yeast and sugar in producing alcohol and carbon dioxide: proof positive that good teachers are born, not made.

Great day, walking along the river bank and back through time - sweet memories of a landscape that was far removed from the gentrified waterfront, with its mill conversions and purpose built apartments. If any of my former TS Ark Royal shipmates read this, Old Myron's Navy's still pulling, just not by Crown Point anymore.
Posted by westfieldeditor at 9:47 pm No comments: Links to this post