A fiver to park - a great day out

Burnsall in Wharfedale is one of the Yorkshire Dale's most picturesque villages, and home to a tradition much-beloved of Yorkshire folk - especially those from West and South Yorkshire who like to explore the rural beauty of the Dales as a way of recharging urban care-worn batteries. There's a field by the river at the side of the historic bridge where generations of families have parked their cars before getting down to the serious business of cricket, football, picnicking, barbequing or mucking about in the river. We had a glorious day there yesterday and stayed much later than everyone else - so late, in fact, that even the ducks were returning home as we left. 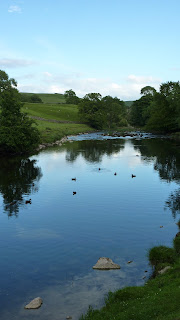 Best fiver I've spent in ages.
Posted by westfieldeditor at 1:25 pm No comments:

A voluntary invitation, but it'll cost you...

Youngest son has had a very good year at school. Or rather, he's been so good at school that he's been invited to spend the day trampolining. In fact, quite a lot of his year have been good enough to qualify for the bouncing extravaganza. It turns out that all but the most serial of recidivists (ie those who have accrued more than three after school detentions) have been invited to momentarily defy gravity. Parents and carers have also received an invitation - but in our case, it's to make a 'voluntary' contribution to the cost of the revels. You see, while the school isn't making a formal charge, the event simply can't go ahead if enough of us - preferably all of us really - don't cough up a voluntary tenner; but who could refuse - when our offspring have been so good? The letter home also mentions that we should also give them some money for food if we're not sending sandwiches, along with a small additional sum to allow for the purchase of friperies or mementoes of the day. Of course, even the most curmudgeonly parent would be hard pressed to begrudge the invitation to make the 'voluntary' payment, even though, on close reading of the letter, that word has been given the clear imputation that it actually means completely the opposite to that found in everyday usage: no money, no bouncing. Can't help but wonder what's planned for those left behind in the naughty corner: oakum picking or mail bag stitching, perhaps? Not that I'm advocating a return to Victorian punishment in our schools; that can safely be left to Nicky Morgan, our perpetually surprised Secretary of State for Education - although she could possibly consider an encyclical to all heads pointing out the real meaning of 'voluntary' and 'compulsory' in communications to parents and carers, if she can tear herself away from making a complete dogs breakfast of the exam system, that is.
Posted by westfieldeditor at 12:11 pm No comments:

Called into our local Tesco this morning (Saturday and Supermarkets - what's not to like?). In the foyer a small group of volunteer or press-ganged employees were clustered round a stall raising money for Tesco's charity of the year: Diabetes UK. On turning into the store, what struck me was the stall was directly facing the Krispy Kreme doughnut stand - which from its highly visible logo display and dominating position must be a paid-for concession. The incongruity of this struck me straight away - how can Tesco 'adopt' a Diabetes charity when they take Krispy Kreme's cash to ensure prime position? And how come Diabetes UK don't kick off about this (or vice versa), given the health risks so clearly associated with the consumption of excess sugar and saturated fats? On raising this via Twitter with Tesco, I was told that my concern had been noted, then that the store's deputy manager had replied that the charity stall had to be in the foyer, and finally that to 'log my concern' they wanted me to DM my name and address. I refused, after all, if Tesco customer services can't work out the health risks for themselves, how would the addition of my name and address to their database of troublesome customers allow them to take the matter any further? Finally, another Tweet revealed that Tesco are now following me on Twitter...
Posted by westfieldeditor at 7:21 pm No comments:

When they named the Pollock
Did they have a strange wish
To perhaps malign the poor fish
Or maybe just drop a bollock?

Posted by westfieldeditor at 6:55 pm No comments:

An app to record war crimes

Need to declare a tiny bit of an interest here, as I do some work for one of the following, but it's in tax, family and weights and measures law, so I've no direct link to a little bit of tech wizardry that might just bring war criminals to justice. LexisNexis and the International Bar Association have joined forces to fund and develop EyeWitness, a smartphone app that allows witnesses to record atrocities. The recordings are masked from the prying eyes of state agents of nasties with guns who might see the phone user filming them, and stamped with authentication meta data that should allow for the recording to be adduced as evidence in court. It's not every Monday morning that the world of legal publishing feels this good to work in...
Posted by westfieldeditor at 11:07 am No comments:

Raymond and the Roman cavemen

In a move that was probably seen as really progressive at the time, my 1960s county primary school (we didn't have much truck with academies back then), boasted a Partially Sighted Unit, commonly referred to as 'PS' - where a small group of partially sighted children, aged between 5 and 11, were educated in glorious isolation from the rest of us. There were, however, a few exceptions to this rather patronising situation, and one came to join our Year 1 class of 7 year-olds, in the form of Raymond, who was permitted to join us for History lessons with Mrs Wonce a fortnight. A rather shy boy, Raymond had the look of a rather startled owl when we looked at him because of the thickness of the lenses in his glasses. Mrs W, who bore a more than passing resemblance to Frankie Howerd in drag, made Raymond sit at the table I shared with three or four others, and we did our best not to stare and generally to make as welcome as a group of 7 year-olds could (which in general terms wasn't very much and probably didn't do much to make him feel anything other than a strange addition, plucked from his comfort zone to join a mainstream class). We quickly learned that Raymond (never Ray...) was very keen on history as a subject, but that his fortnightly appearances could be very unsettling. Back in the early 70s, the history curriculum was highly selective and started with the Stone, Bronze and Iron Ages before taking in the Romans, Saxons and Normans - but if you only came to every other lesson, your appreciation of the majestic sweep of history could soon become disjointed. Raymond was doing fine until we got to the Stone Age and joined in with the depictions of cave dwellers and their animal drawings we were expected to produce in picture form and then label, but then for reasons I can't quite remember, he missed the next two lessons and rejoined us for the thrilling account of the arrival of the Romans. This caused a change in Raymond that was as startling as near miraculous. He wanted to know how we'd got from troglodytes to Legionnaires and from cave painting to Caesar hunting down Boadicea's Iceni. We hadn't much of a clue either, but under his earnest questioning and magnified gaze the only possible option was to make it up. Mrs W wasn't that much help - probably away with another table trying to titter ye not at their artistic interpretations, and - this in the age when talking wasn't allowed in class (as opposed to today, where discussion isn't so much encouraged as compulsory), so that our gap filling commentary was also conducted in whispers, with a few pointed references to pages in the text book. Chronology isn't a strong point at that age, and I can dimly remember Paul B introducing a dinosaur or two into the equation. I don't know how much Raymond managed to assimilate, and I've often wondered since how he ever managed to fill in the gaps between the making of flint tools and straight Roman roads and funny names for places, such as Olicana for Ilkley or Eboracum for York (which seemed to be about the only things the Romans ever did for us that we could glean from Mrs W and our Schofield and Sims junior history textooks). I just hope that we didn't bring to a very premature end the promising career of one of Britain's premier partially-sighted historians.
Posted by westfieldeditor at 4:55 pm No comments:

Standing on the corner of St George's St, watching the parade go by. 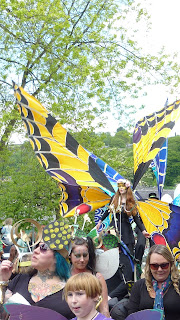 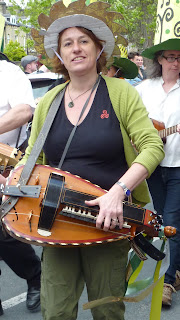 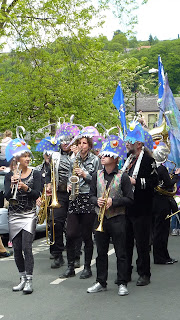 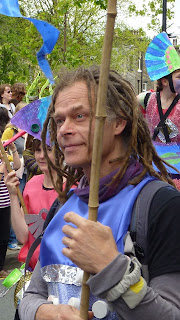 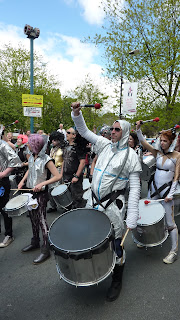 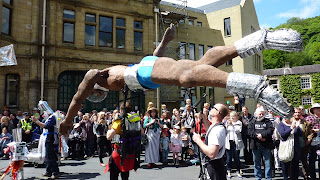 That was just so Hebden Bridge!
Posted by westfieldeditor at 4:20 pm No comments:

Noticed a promising new job advertised online, a transport company wanted a training consultant. But decided not to bother when I read the HR spiel. Apparently, they want someone who's 'passionate' about putting stuff in lorries to teach others how to do it 'passionately' too. Where do HR/recruitment wonks learn to spout such utter bollocks?

Posted by westfieldeditor at 9:22 pm No comments: