Take your partners for the great energy switcheroo...

Hacked off by Eon's latest price hike, a price comparison check showed that Co-operative Energy was cheaper. Being an existing Co-op member, and feeling that it would be good to cut the shareholder dividend out the price equation, I opted to change supplier to the Co-op.
Now received three emails from the Co-op requesting final meter readings. I've responded to these but the site linked to the request can't accept a gas reading because they haven't yet received a final reading from Eon. Which the won't - because Eon are waiting for the final gas reading from the sodding Co-op!
Human contact is out, of course. An insipid recorded voice tells me they're experiencing "high call volumes" (no big surprise there, probably legions of us frustrated would-be switchers caught in limbo betwixt suppliers).
So much for government and Ofgem assurances that switching is now much easier and that customers should shop around.
From what I've seen so far, with sob story calls from Eon and Co-operative Energy's inability to read emails switching suppliers is as frustrating as ever.
Posted by westfieldeditor at 12:58 pm No comments: Links to this post

A Rather Poetic Pennine Wander

Spent the afternoon of New Year's Day walking from Lumbutts to Langfield Common in Calderdale, West Yorkshire. Following Paul Hannon's Hebden Bridge and the Calder Valley guide, we set off from Lumbutts, a hamlet in just off the Pennine Way long-distance footpath near Todmorden in the Calder Valley.
A strong wind at our back, we walked from the Shepherd's Rest public house away from the hamlet to join the Pennine Way before turning back at the Long Stoop to return to Lumbutts down an ancient packhorse path.
The walk was certainly invigorating, though we found some of the rather poetic instructions hard to follow in places, in particular the sections describing the path leading from Lumbutts to the Long Stoop. All in all, though, an great walk - certainly blew away the post-Christmas cobwebs. 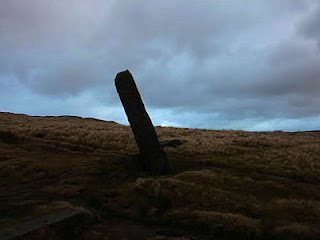 The Long Stoop
Posted by westfieldeditor at 7:00 pm No comments: Links to this post