Virgil Tracy lives on our street

The electric double up-and-overs hide his island of neat Each tool and gadget is easily to hand Thuderbird 2 has been swapped for a white van. Hours spent wall-mounting, storing and ordering Unlike the rest of us unprepared tool-fumbling dimwits He knows anything could need fixing in the next 30 minutes.
Posted by westfieldeditor at 12:11 pm No comments: Links to this post

A problem in the trouser department

When was it decided that button flies were back in fashion? What will they bring back next - night soil removal? Rickets? I know UKIP and the Tories want to take us back to the fifties, but hadn't realised zips were on the list of things they disapproved of, along with social security, the NHS and human rights.

Posted by westfieldeditor at 6:48 pm No comments: Links to this post

Time was if misfortune or accident struck, you called your insurer and left it up to them to sort put estimates and costs. That's what insurance companies did. But then, insurers realised they could cut operating costs by turning themselves into call centres, which handled the initial contact, and sent out premium reminders - which have now morphed into egregious auto renewals, complete with nasty, unexpected direct debit bills. The difficult site visits and dealing with builders, mechanics, car body repairers, etc being farmed out to loss adjusters.
The insured, having notified the insurer of a claim, would then deal with someone from a different company, who sorted out the costs and expenses and instructed the repairer. But now, yet another entity has interposed itself between insured and insurer: the claims or loss assessor. Once a claim comes into existence, these bottom-feeding ambulance chasers use divers means, including, apparently, payments to emergency service personnel, to discover the identity of the insured, and then hasten to 'sign' them up, by getting signatures to a contract that allows the assessor to 'manage' the claim on the insured's behalf, in return for commission payments from the repairers they obtain permission to use from the loss adjuster.
In reality, however, the assessor is doing nothing the insured couldn't do in person, and adding yet another party into the equation also increases the time taken to put right the damage caused. Unnecessarily complicating the claims procedure adds to adminstration cost and that forces up premiums, meaning that we all lose, due to the resistable rise of the loss assessors.

Posted by westfieldeditor at 6:43 pm No comments: Links to this post

The picture was taken 100 years ago today - my grandparents married at St Andrew's Church, Burley, Leeds on 1 June 1914. Just 27 days later, the heir to the Austro-Hungarian throne was assassinated in Sarajevo - a place that most of the people in the photograph would never had heard of. But by the beginning of August, WWI was declared and within 4 years my grandfather would be fighting in Flanders and of his two brothers, Arthur would be a prisoner of war in Germany, and his youngest brother, Albert, would be dead - killed in an air raid at Ypres. Of two of the male cousins in the photograph, one would lie about his age to enlist and another would endure the opprobrium and ridicule reserved for the conscientious objector. Before the public displays of remembrance start, I want to offer my family as an example - on this, the centenary of my grandparents' wedding - as a reminder of what war did to ordinary people, and how they coped with the horror of events way beyond their experience or control. 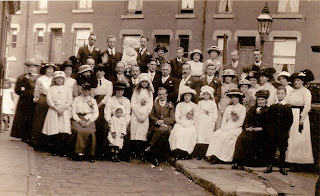 Posted by westfieldeditor at 1:02 pm No comments: Links to this post